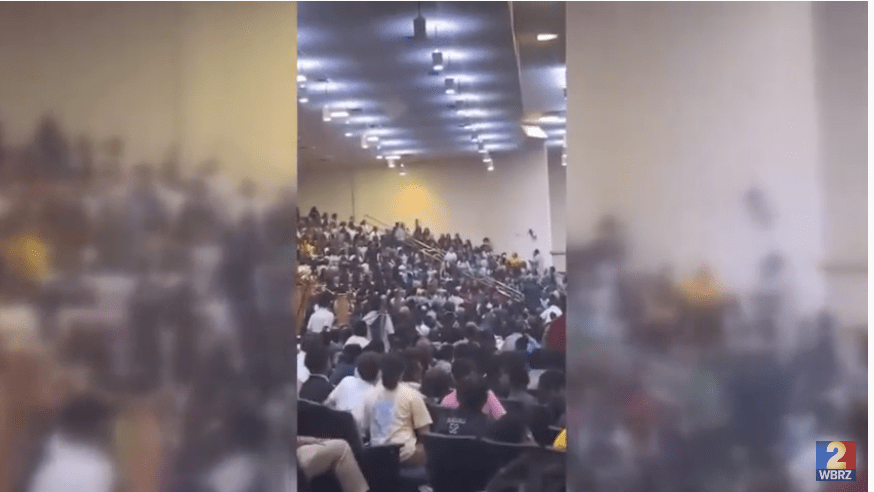 Students were bussed to the event under the impression they’d get some free food and insight into life after high school. Instead, according to biology teacher Brittney Bryant, who attended the event, students were separated by their sex assigned at birth, and her only trans student was told they couldn’t go with the other boys.

Bryant wrote in a Facebook post that while boys did push-ups and games in one area (which Bryant says was actually outside and in “extreme heat”), girls listened to speakers encourage them to forgive their rapists. Bryant said some students were so upset, they ended up crying in the bathroom. Bryant alleges some students poured water over the heads of trans students without repercussions.

“God forbid I mention anything about sexual orientation, religion, or political agendas in my classroom,” she wrote in part on Facebook, adding if she did so, she’d be put on leave from her job.

Bryant also alleged in her Facebook post that students were incentivized to fill out voter registration forms in order to get free pizza.

“I learned that the children were told in order to receive a “meal ticket” they were told to complete a voter registration,” she wrote in part. “When I went to confront the unethical situation running councilman Darryl Hurst was the one handing out voter registration to the long line of students hoping to get fed pizza at the end of the event. Later was told the pizza was provided by another non profit and it was an “incentive”.” She went on to call this “propaganda” and said some students were actually under 18 years old.

One student who attended the event, Alexis Budyach, said an adult read a Bible verse on stage at the beginning of the event. This is inappropriate for a number of obvious reasons, but it’s especially important to note as it directly contradicts what the school district has said. The East Baton Rouge school district insists this wasn’t a religious event, and that any prayer was initiated by students and not planned ahead of time.

Lawyers are reportedly poised to bring a lawsuit over possible civil rights violations and emotional distress, as covered in this local news story from WBRZ.

Parent Bonnie Kersch, whose daughter attended the event, told the outlet her daughter didn’t realize it was going to be so religious. Kersch said her daughter felt she was “duped” into thinking it was a college and career fair, only to be “proselytized over and prayed over.”